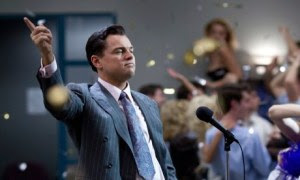 Without a doubt every foreclosure

judge and any judge who has ruled in favor of the banks over duped homeowners should be required to watch The Wolf of Wall Street - not once but several times.
Every time the Courts consider ruling in favor of these decadent Wall Street creatures – they should be shoved into a room with a wide flat screen TV, handed a box of popcorn and ice cold Coca Cola and locked in there for 180 minutes – so they can see exactly what they are sustaining by ruling in favor of the banks.
The Wolf of Wall Street is based on the true story of Jordan Belfort, from his rise to a wealthy stockbroker living the high life to his fall involving crime, corruption and the federal government. Martin Scorcese’s The Wolf of Wall Street with Leonardo DiCaprio in the role of Jordan Belfort opened recently to critical and popular acclaim.  MORE
Posted by Melinda Pillsbury-Foster at 4:32 AM